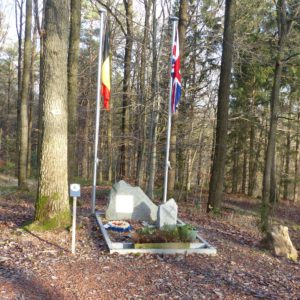 On 31st March 1944, around 21.45hrs, an English bomber (an Auro Lancaster with 425 LM-BQ-N registration) with seven crew members on board, from the English base North Killingholme left for Nuremberg.

This aircraft was part of the 550th squadron of the Royal Air force  established in november 1943. This squadron was composed of heavy bombers for the destruction of the German industry. Every night hundreds of planes from different English airbases, gathered in the air to fly to Germany to bomb the industry of the enemy.

One plane got hit by a German fighter plane as it flew just above Jalhay. Fire broke out on board and the pilot dropped its bombs on an uninhabited area trying to make an emergency landing near Gileppe. Unfortunately the plane plunged down in an area that is called “Cœur de Marie”. The fliers had no time to leave the plane in time.  The crashwas terrible. Debris was scattered all over the place. Sgt. Arthur Jefferies, Robert Paxton, Harold Simpson and James Whitley did not survive the crash and they were buried at the military cemetery of Heverlee. The other three, Sgt. D.S. Jeffrey, S.A. and W.G. Keirle Upton were captured and released in 1945.

Of the 125000 pilots of the Royal Air Force who participated in the bombing, only 69427 returned.

In 2008  two hebitants of Jalhay hear about this air disaster, so close to their home. They begin an investigation to establish a memorial for the young men who have fought for our freedom. There are villagers who in 1944, were right on the spot of the accident and just before the Germans came. The two are provided with valuable information about the exact spot where the Lancaster crashed. A  memorial stone and plaque is erected. Frederick Thomson, a talented sculptor of Jalhay, offers a work of the plane with the nose down. The official inauguration took place on April 9, 2016, in the presence of the British Ambassador Alison Rose, Colonel Crucifix, Commander of the armies, as well as the municipal authorities.