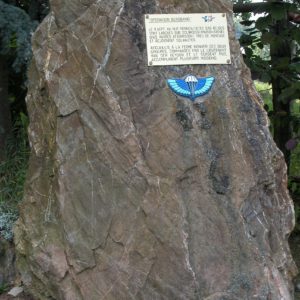 This monument is in memory of the operation “Bergbang“. On 9th September 1944,  eight Belgian SAS paratroopers were dropped above Solwaster. Eleven others were dropped near Monschau close to Solwaster. From the farm Boniver these two groups, led by Lieutenant Van der Heyden and Sergeant Pus, have accomplished several missions.

Led by Gilbert Lawrence from Solwaster, they took part in an action to cut off part of the Panzer (armored)division, including a high-ranked Colonel. Place of operation: Sart-Station near the former hotel.

We use cookies to ensure the best experience on our website. If you continue to use this site, we will assume that you are satisfied.I understoodPrivacy policy