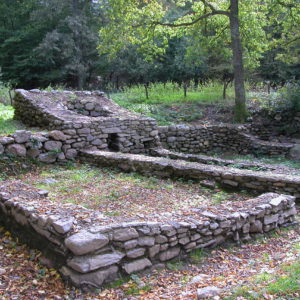 Along the Hoëgne, at Parfondbois (Solwaster), the remains of a former forge and associated furnace are present. This furnace was first documented in 1480 and again in 1503. There were different names for this forge such as: the Chastelein “or the “Forges Racket”. In 1609, the forge was still operating, but no further documentation was found.  The excavations of the forge started on  May 10th, 2004 and were completed in early 2005.

Several centuries ago the Hoëgne played an important role in iron extraction, for which the Marquisate of Franchimont was well-known. Numerous iron ore deposits of varying quality are still present.